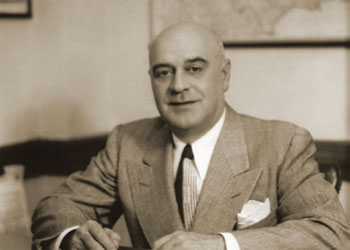 "...he had earned national prominence and was proclaimed, 'Juice Grape King
of the United States' by New Yorker Magazine."

Anthony A. Bianco's business skills surfaced early in his life. As an 18-year-old Italian immigrant, he bought and sold fresh produce from a pushcart in the streets of New york City. His determination to succeed led him to open a marketing and distribution company on the New York Produce Market within only a few years.

24 years later, Anthony Bianco moved with his wife and 8 children to Fresno, California to be closer to the grapes and tree fruit that he would sell through his New York office. In 1950, he founded Bi-Mor Farms and Bianco Fruit Corporation to market his produce. By 1958, he had earned national prominence and was proclaimed, "Juice Grape King of the United States," by New Yorker Magazine.

Following Anthony Bianco's death in 1967, his 4 sons carried his vision forward founding Anthony Vineyards with 160 acres of grapes. Today, with their land holdings at more than 6,500 acres, the 2 youngest of the 4 - Domenick, or, "Cookie," and Robert, or, "Bobby," oversee the day-to-day operations of Anthony Vineyards, and count some of their own sons and daughters as employees, with yet another generation entering the ranks.

Anthony Vineyards' vines begin their lives either as saplings or as grafts, spliced to the base of more mature plants with surgical precision. After 3 years, they are replanted in rows and in most cases trained branch-by-branch to follow the arch of a trellis, which allows workers easy access to their leaves and fruit.

The carpets of barley separating the rows of vines contribute nutrients to the soil and moderate extremes in temperature. They also provide a home for ladybug beetles, who feed on aphids and other pests. Water for the vines and barely is delivered by an irrigation system which monitors moisture literally down to the drop.

After 5 years, the pampered vines are ready to produce grapes worthy of the Anthony Vineyards name. The meticulous care that led to their harvest follows them through rigorous inspections and right to the grocer's shelves, where any package of Anthony grapes can be traced back to the vineyard, field and row that it came from.

Thank you! Your submission has been received!

Oops! Something went wrong while submitting the form